Letter from the Editor


In one of his often-quoted Urdu couplets, Indian poet-philosopher Muhammad Iqbal sought to capture the dizzying transformations of his age: “Calm is elusive in the workspace of the universe/ The only constant here is change”. Iqbal wrote those lines during the turbulent years of early twentieth century colonial India, but his words ring equally true for our pandemic-ridden times. Our generation is witness to some of the most seismic social and economic changes since the end of the Second World War. This past year has seen upheavals that few could imagine, with entire industries decimated, economies brought down to their knees, and hundreds of millions pushed out of work and into poverty.

At the time of writing this letter, CoVid-19 has claimed more than three million lives and its latest variants are raging across countries in Asia, Africa and Latin America. And yet, despite all the pain and misery it has inflicted on the world, the pandemic has created new economic opportunities, opened up new political possibilities, fostered new forms of collaboration, and enabled new bonds of solidarity. The pause in economic activities forced states to take a more active role in providing financial protections to their citizens. The movement of the virus across borders challenged the nativist idea that global risks and hazards, like that of public health and climate change, can be stopped at national boundaries. The pandemic demonstrated once more that our fate as a species is interconnected.

As governments gradually ease restrictions, and communities emerge from months of lockdown-induced isolation, there is a palpable sense that the world in which we are entering is different from the one we inhabited before. Rather than being relieved at the prospect of returning to the normal, many of us are stung by a nagging feeling that the goalpost of our cherished “normal” has shifted considerably. In time, the death and affliction caused by this virus will be behind us, but the full implications of this extraordinary global event will only become visible in the years and decades to come. It is this idea of emergence—of emerging into a new, unknown world—that served as an inspiration for our theme for this edition.

As our call for submissions stated, to “emerge” is to move and transform, to go from one state to another and confront the possibilities of both regeneration and degeneration. Our contributors took this idea of emergence and made it their own, applying it to a whole host of personal, social and political situations. In this edition, readers will encounter stories of loss and redemption, perspectives on social change, and reflections on dominant discourses that prevent the emergence of new possibilities.

Davey Ozahowski’s powerful essay takes readers on a sentimental ride, sharing with them memories of his parents that have been weaved around an old apple tree in the front yard of his family home. Pierce Ellinwood writes in compelling prose about the music and message of 1980s hip-hop collective Native Tongues and their embrace of Afrocentric positivity. Henry Gould brings to light the darker aspects of Chinese infrastructure development projects in Ghana and considers the neo-imperialistic implications of the presence of Chinese diaspora in his home country. Amanda Skinner’s “Cartography” deploys the metaphor of body to capture the absurdity of national boundaries, while Erin Bennett’s “Possible Ending #14” unsettles our collective anticipation for fairytale endings in the stories we tell.

This edition would not be possible without the commitment and dedication of our editors. I especially want to thank alumni editors Sabine Hoskinson and Maisea Bailey, and associate editor Joe Martinelli, for their generous contributions to the review process. On behalf of the editorial board, I want to express our sincere gratitude to Prof. Anna Minardi whose guiding hand has ensured the continuity of this journal in the most difficult times.

I hope you will enjoy the pieces in this edition and consider getting involved with the journal.

The Apple in Me
David Ozahowski

Native Tongues and the Black Atlantic: Hip-Hop in the Afrodiasporic Tradition
Pierce Ellinwood

Neo-Imperialism and the Chinese Diaspora in Ghana
Henry A. Gould 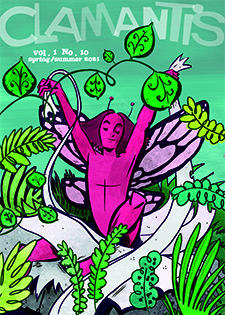